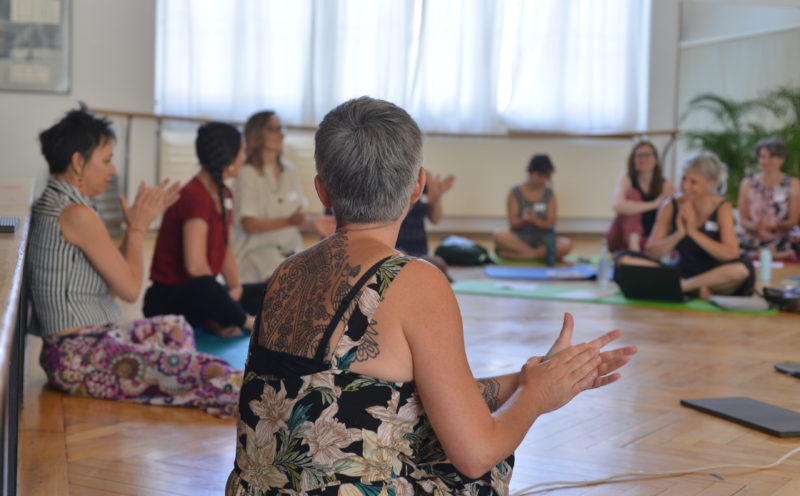 « Drama therapy is an active, experiential approach to facilitating change. Through storytelling, projective play, purposeful improvisation, and performance, participants are invited to rehearse desired behaviors, practice being in relationship, expand and find flexibility between life roles, and perform the change they wish to be and see in the world. »

Beyond the ancient connection between theatre, dramatic ritual and healing, closer to our time, Dramatherapy became a specific profession in the 1960’s. During the 20th century, there was a strong development of drama within educational, health and social settings. In the UK and in North America formal dramatherapy training emerged in the 1970’s leading to dramatherapy being recognised across many parts of the world as a psychological treatment for adults and children within health, social care and education by the end of the 20th century.

Dramatherapy evolved gradually in different parts of the world, influenced by various individuals, groups and approaches, in relation both to the development of theatre and developments in the fields of psychology, sociology and psychotherapy.

The development of dramatherapy is closely associated with the evolution of drama itself. Related to drama is theatre and it could be said that what distinguishes them is that drama refers to a physical expression and enactment in general, and theatre refers to a specific structure of performers separated from spectators and involves a performance area or stage. Theatre originated in the ancient world, bringing together poetry, myth, dance, music and religious rituals. Theatre emerged slowly out of religious rites, taking on educational and civil functions in the presence of spectators. It was the Greeks who coined the term drama – to designate action or ‘a thing done’. It is from drama that theatre evolved. The primary structure of western theatre was conceived and codified in ancient Greece.

In Greek tragedy, Aristotle identified the significance of catharsis which in both medical and ritual literature, refers to a type of purging or purification. Rather than eliminate distressing emotions or fears, the cathartic element of Greek tragedy enabled people to connect to these feelings, on a personal, collective, and even universal level. Aristotle believed that the dramatised imitation of an action led to catharsis. The concept of catharsis as emotional relief is central to the therapeutic use of drama. Of equal importance, is the notion that involvement, identification, and the ambivalence of knowing that events on stage are not real but are perceived to be real at the moment result in a temporary suspension of disbelief. This is an act in which both audience and actors willingly participate and collude to create effective theatre. These ideas have influenced dramatherapy. The ancient practice of shamanism is also considered to have influenced dramatherapy and is considered by some as the ancestor if theatre.

The emergence of drama as therapy in modern western culture can be found in continental Europe in the nineteenth century. Theatres were built in psychiatric hospitals in France and Germany for treating patients.

In the early 20th century, three people made a big contribution to theatre as therapy:

– a Russian theatre director named Nikolai Evreinov who linked theatre and therapy in his account of ‘Theatrotherapy’ written in 1927. His emphasis was on the process of the actors rather than the performance and on theatre and play as important to the development of intelligence.

– Vladimir Iljne from Russia who was forced to leave his country for political reasons and settled in Paris in the 1920s. He came across the use of role play in a psychoanalytic context which inspired him to develop ‘Therapeutic Theatre’. He worked with groups or individuals using drama games and improvisation.

– Jacob Levi Moreno born in Romania and grew up in Austria where he studied medicine and philosophy and later worked as a doctor. From his dissatisfaction with the contemporary way in which plays were produced, he created his own improvised ‘Theatre of Spontaneity’, based on real-life stories rather than fiction. Moreno moved to America where he developed the basis for a therapeutic method he called ‘Psychodrama’.

Theatre evolved throughout time in response to the developing world around it. Directors and playwrights whose influence is particularly relevant to dramatherapy are:

– Constantin Stanislavski who established spontaneous performance or improvisation in rehearsal as a vehicle to help actors in their preparation for performance. His technique was designed to evoke memories which stimulate the required emotion for the action portrayed on stage. By associating real situations with the character and exploring those feelings in improvisation, the actor is able to reproduce actual emotional responses. About this time Moreno began using similar techniques to explore real life situations and based his method of psychodrama on improvisation.

– Bertolt Brecht introduced his method of ‘alienation’ in theatre in the 1930s. His aim was to remind the audience that the happenings on stage were not real in order to draw attention to an issue. The intention was to cultivate awareness of political injustice and not just to entertain.

– Antonin Artaud, a French director in the 1930s, wanted the audience to identify with the action on stage to a point where they were confronted by their own lives and inner conflicts. His ‘Theatre of Cruelty’ was meant to lead the spectator to find a different perception of life.

– Jerzy Grotowski, a Polish theatre director of the 1960s, had the actor–audience relationship as the focus of theatre. The stage was important only to assist that relationship. Actors sometimes performed in the round, or mixing with the audience, or distanced from them. The actors were central to the performance and the use of their bodies rather than script was the means of communication. Non-verbal expression was encouraged by physical exercises and ritual.

– Augusto Boal, a Brazilian theatre director, who was affected by the political oppression in the 1970s, perceived theatre as a way to effect reform. Through theatre, he aimed to bring an awareness of both the oppressive situation and the possibility of change.

Dramatherapy as a specific profession

The term dramatherapy was first used in the UK by Peter Slade in a paper he gave to the British Medical Association in the late 1930s (Langley, 1995/6). This was the first contemporary recognition of the healing properties of drama. Slade became interested in children’s play when he was a young actor and realized that drama originated in play. He developed his method in adult mental health by collaborating with a Jungian analyst. It was during this period that he was invited to speak to the British Medical Association and the term ‘dramatherapy’ was born. Like Slade in the 1930s, Sue Jennings in the 60’s was not working as a teacher in school, but as social educator facilitating self-awareness with a view to behavioral modification. She found that the children who were most disruptive were sent to her drama classes and began to show some change in behavior. She later worked with Gordon Wiseman to create the Remedial Drama Centre in London. Sue Jennings has written widely on dramatherapy and been a pioneer contributing her knowledge and expertise towards many dramatherapy trainings.

In the 1990s Brigitte Spörri Weilbach, the pioneer of drama therapy in Switzerland, met Dr. Susana Pendzik. Thanks to this encounter, dramatherapy workshops and short trainings started to be offered in Switzerland. By 2000, Brigitte Spörri Weilbach had established a one-year CAS in dramatherapy (certificate of advanced studies) at the University of Applied Sciences St. Gallen. Dr. Sue Jennings, Prof. Mooli Lahad and Dr. Susana Pendzik were already part of the team of trainers. Four years later, she founded the professional association for drama therapy (verein dramatherapie.ch) and in 2011 the Swiss Training Institute of Dramatherapy (dramatherapie.ch BildungsInstitut, DTI).

Since 2012, the dramatherapy institute provides a full training to both swiss german and swiss French participants that meets the requirements set by the umbrella organization OdA Artecura which regulates the profession of arts therapies in Switzerland and provides a qualifying federal professional diploma for arts therapists of all specializations since 2011: dance and movement therapy; drama and speech therapy; art therapy; intermedial therapy and music therapy.